We don’t do Jesus in our house.

I grew up Christian-ish, went to Catholic school because it was the best private school we could afford (CA public schools are, um, ever so slightly under-funded), and grew up in a country where talking heads talk about the “war on Christmas” with all the fury of avenging Valkyries. But I also happen to think that Jews have some seriously good shit going for them, Buddha made some excellent points, Islam led to the flourishing of amazing civilizations, and I don’t know much about Confucianism, but if that many people are into it, it can’t possibly be all bad. What I’m trying to say here is that I’m not convinced that anyone has all the answers, and even less so that if I don’t believe in one guy who rolled through an obscure corner of the Roman Empire a couple millennia ago, I’ll go to hell. Or that there is hell. Or heaven. Though if there is, I bet God throws a rad after-party.

At any rate, Christmas is undeniably a Jesus holiday, even giving proper respect to the pagan sun-worshipers who came up with the idea, and eventually I kind of think I’ll need to explain that to the wee one. We’re in Berkeley, and even living across the street from a church I think you’d be pretty hard-pressed to find a traditional nativity scene around here, but still, it kind of seems like an important point to discuss in between all the wrapping paper and cookies? I mean, we at least pay lip service to that bum Columbus during the Indigenous Peoples’ Day festivities, right? 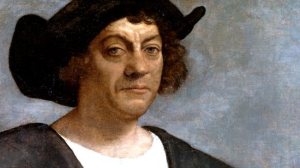 The face of a man who managed to commit genocide AND start the world-wide spread syphilis, all in one year!

Yesterday I stumbled across this explanation of Christmas from a Unitarian perspective, reminding me yet again that Unitarians are a cool bunch of weirdos, and if there’s a greater power in the cosmos he definitely lets them all into whatever private club she has going on.

See what I did there? Referring to a deity as he, then she, in one sentence?! BAM. Mind. Blown.

Let’s be real: Jesus was probably fabulous with a contour brush.

As I was saying, it got me thinking about what version of the story I’ll be fondly telling my offspring someday, sitting next to a yule log and sipping hot toddies, having philosophical discussions about the meaning of giving, while snow drifts lazily past our windows. And here’s what I came up with:

We’re about to blow this nativity scene WIDE OPEN.

Once upon a time, there was a lovely teenager named Mary. She always listened to everything her parents said, did all her homework without complaining, and helped out around the house. She was engaged to a sweet boyfriend named Joseph that her parents approved of, and life was going swimmingly. Even though teenagers shouldn’t become engaged, but people only lived to be, like, 25 in those days, so you kind of had to get your act together fast before you kicked the bucket.

Now, I don’t know how it happened, but Mary became pregnant.

Do you know how babies get put in mommies’ tummies? Where in the chronology of conversations does this fall? Let’s assume there’s been some basic biology already laid down, because I’ll get seriously derailed if I have to go into that whole shebang.

Yeah, I should probably think about this conversation too.

ANYWAY, there Mary was, preggers, and usually that takes a man to put his sperm inside a woman, but Joseph said he hadn’t done that.

Yes, it takes a man and a woman except when there are two ladies, or two men, or a man and a woman whose bodies don’t work quite right, or a person who wants a baby alone… But we’re talking waaaaaaaaay back in the olden days. People knew so little about science back then that if you made a baking soda volcano, they’d probably stone you as a witch.

Rules were different back then, and Mary could have gotten into a lot of trouble for being pregnant before getting married. Trouble even worse than losing your screen privileges for a week!

I know! That bad! 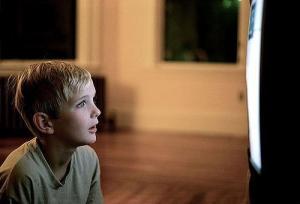 “Quiet mother; this is my only god.”

But Joseph loved Mary, so he was all, “Dude, it’s cool,” and he married her, and said he’d love the baby just as if it was his. Joseph was a really great step-dad, because he knew it’s actually love that makes a family, not some weird hangup about genetics.

Genetics? Oh. Uh. You know what, I’ve got a great cartoon to show you that will explain all that after this story is over.

Where was I? Oh yeah! Joseph and Mary got married, and they were going to make a family, and that was pretty great. And in some versions of the story the baby’s bio-dad was God, but that doesn’t really matter, because the person who’s there every day to help raise you is your real daddy, and that was my man Jo there.

So things were going pretty well. Mary was grumpy because the third trimester in the middle east is no joke, but otherwise things were looking up. Unfortunately, the government wanted to do this thing where it counts everybody, so it knows how much it can make in taxes off them, and Joseph wasn’t a local boy, so the couple had to travel to the town he grew up in, Bethlehem, to be counted. Which was really stupid, because they were already in the town Mary was born in, and you’d think they could be counted in either place, but that’s the patriarchy for you.

[No child of mine will get this far in life without already knowing about the patriarchy, so I’m not going to stop to explain that one]

So by the time they get to town, Mary’s about to pop. That baby wants out, and there’s not a lot either of them can do about it. So Joseph runs around town, yelling about how his wife is having his baby, well not his baby, it’s complicated, but a baby that he plans to raise as his own, and after all isn’t that what it’s all about, so maybe he really should just say it’s his baby without any qualifiers…

THIS ISN’T HELPING ME CENTER MY BREATHING, JO

By this time, people had gotten bored and stopped listening, so they couldn’t get a hotel room. Now, having a baby makes a BIG mess, and takes some serious concentration, so they didn’t want to just hang out on the sidewalk. Jo, thinking fast, remembered a barn they had seen a block back, with plenty of straw to soak up all the blood and mucus.

So they waddled Mary over as fast as she could go, and she didn’t really care very much at that point where they were, because OW, and then the baby was born. And they were both so happy, and so tired, and so relieved that they thought their hearts would explode. And everyone took a nap, right there in the barn, using a friendly donkey as a pillow. 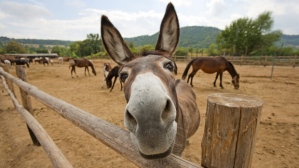 Later on, that baby grew up, and spent a lot of time telling people to be nice to each other. He was pretty good at talking, so people wrote down what he said, and made it into a book, and since a lot of people still take his advice, we celebrate his birthday every year to remember how crazy his birth story was.

And that’s why we have Christmas!

Stockings? Because when that baby grew up his feet were really, really big, and it sort of became A Thing, and his nickname was Big Foot, and all his friends were like, “Hey! Big Foot! Good to see you!” So the stockings are in honor of that. 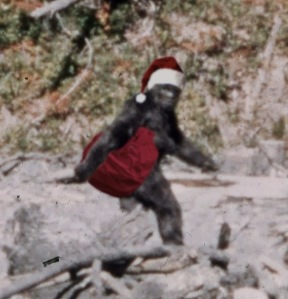 This story has gotten way out of control.

Santa was this cool dude raised by fairies and a panther, who led a war against the trolls, and eventually was given the cloak of immortality by the Elf King for being so kick ass. If I remember correctly.

So there you have it! The real meaning of Christmas! Sweet dreams, my pet, and remember that everything I tell you is always completely accurate.