Note: If you’re easily grossed out, maybe don’t read this. Here’s a baby elephant having the time of her life at the beach.

Now that that’s out of the way, let’s get right down to it: Poop. 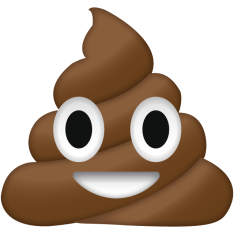 Getting the poop emoji out of the way right now, so we can focus on other things.

Even if you’ve never met a child, you won’t be surprised to know that poop takes up a lot of a parent’s world. Most of your life, you get to blissfully, quietly keep your business private. You bring your phone into the bathroom with you, close the door, and that’s that. And then you suddenly have the bodily functions of another human being to worry about. Hell, if you have a kid via pregnancy, then your own bowels become a topic of conversation, long before the succubus makes his or her way to the outside, or at least it did for me.

Yep. You had to have seen this coming. It’s oversharing time!

Hooray, just what we always wanted!

If you met my sweet, affectionate goblin today, you’d never guess how much misery he has inflicted on all those around him, and me in particular. From the time he was just a ball of dividing cells, he made me sick. Like, sick enough that when I went in for my first prenatal, I looked so miserable the doctors and nurses were all treating me reeeeeaaaally gently, and it finally clicked that they thought this was unplanned, and that I was considering an abortion. I had to straight out tell them, no, this was on purpose, I just needed something to stop the literal 24-7 nausea. Please. PLEASE.

Pictured here: the bane of my existence/future heir.

Once we got that misunderstanding out of the way (they totally changed their attitudes, but it made me super respectful of how kind and supportive they were when they briefly thought I was going to terminate), they gave me the same anti-nausea meds they give to chemo patients, and it kind of worked! I could sit up at my computer long enough to get some work done! And, like, forget for whole minutes that I hated the universe and everyone in it! Miracle!!

But. Or butt. (sorry, I had to) They had warned me I needed to take a lot of fiber and drink a lot of water, because this could bind things up a little bit, which, let’s be honest here, sounds more like a mild, “Tee hee, you want to keep regular!” reminder that Jamie Lee Curtis would give you, while peddling the latest brand of yogurt.

Nope. Nope nope nope. I was so constipated I was shitting blood. Yes, you heard it here first folks, I tore up my own sphincter to the point where I had open wounds.

When I called the doctors in a total state of panic, they were very casual about it. “Oh yeah, that happens sometimes.” WHAT?? THIS IS NOT NORMAL!

Needless to say, I stopped taking that, and went back to the option that involved more lying very still for the next few months straight, and less blood.

Okay, we need a break. Here’s a hedgehog, begging for belly rubs.

And that’s the end of my weird pregnancy poop stories, because I was lucky and never got hemorrhoids (I guess the whole bleeding-butt-thing was something technically different?), and I had a C-section, so I didn’t push my infant out on a tidal wave of crap, nor did I have a torn up perineum, to the point where pooping was as scary as birth itself.

If you haven’t spent a lot of time around pregnant women, or been one yourself, I’m so sorry that I had to be the one to break this to you. The butt hole goes through a lot during those nine magical months.

My pregnant body hasn’t betrayed me for ten whole minutes!

Anyway, once you get your own bathroom needs sorted out and back to normal (hopefully), there’s still your little bundle of insomnia to worry about. And you are now in charge of all the poop.

ALL of the poop.

From that first poop, that seriously looks like tar, to the basically not-smelly yellowish poops of a breastfed baby (or the right-out-of-the-gate smelly poops of a formula fed baby), to the “Oh dear god, does he really need to start eating solids?” introductory real poops with digested food in them, you get a whole rainbow of experiences. Bright green poop? Yep. Freaky red poop? Probably. Hell, if someone told me their baby had pooped robin’s egg blue, and the doctor said it was fine, I’d be totally unsurprised. Babies are such bizarre little aliens, even their waste doesn’t make sense.

Hopefully yours is cuter than this one.

Okay, so you survived baby-hood. Do you know what happens when babies become toddlers? They toddle. Which has the added benefit of squishing, squeezing, and generally mashing up poop, so if your diaper game isn’t on point you’ll be cleaning up a shit ton of shit, out of places like car seat corners and cribs.

Do you like having poop on you? Okay, actually, please don’t answer that; what you do on your own time is your business. My point here is that many people do not. I am one of those people. Excrement is gross.

You’re going to have poop on you. If you’re lucky enough to never mistake that brown smudge on your hand for chocolate, well, you’re better off than some moms I know.

And we’re not even going to discuss the part where, for god only knows what reason, evolution didn’t develop an instinct for poop-avoidance, so babies and young kids think it’s hilarious, and will happily explore it if you let them. Hey, new texture!

My own experience has also involved a kid who gets constipated, to the point where, when it finally does come out after days and days, it’s so painful that he’s shaking and crying. To avoid that particular trauma we watch what he eats like a hawk, and on more than one occasion I’ve shoved soap up his butt. 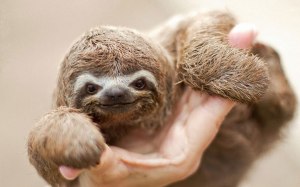 Okay, it’s called a glycerin suppository, and it’s actually way more gentle and effective than Miralax or something like that, but at the end of the day, I’m still taking a tiny little cylinder of glycerin, then, using the stealth and assurance that comes from way too much practice, I’m sliding it where the sun don’t shine.

At least it works well! There was a time we were travelling, and couldn’t find the kid’s sized version, so we had to get the adult one instead, and I found myself standing in front of a kitchen sink, whittling a suppository down to the proper size.

I was basically this guy.

At this point, if you’re still reading after this much butt talk, I commend you. I won’t go on any more about the myriad joys of wiping someone else’s butt every day, or get into the bizarreness that is potty training (did you know some kids actually think of poop as theirs, since it came out of their body, and get protective of it?), but I will leave you with one final, lasting thought.

Be nice to your mother. Because no matter what you do, no one will ever know your butt as well as she does.

Oh, and also here’s a video of baby animals making adorable sounds, as a reward for your dedication.