Actually, when you’re home 24/7, days don’t really have any meaning. But not in a cool way, like, “Sweet, let’s get drunk on a Tuesday!” More like, “Dear god, it’s like I’m stuck in a Twilight Zone episode where the weekend never arrives!”

In the end, it turned out they were all living in an aquarium owned by aliens, who were conducting an experiment on how long it takes to drive someone mad.

Anyhoo, rather than bitching and moaning about the trials and tribulations of parenting, **cough** I mean, other than I already have **cough** today I’m treating you with a story!

Please, if you will, enter the Wayback Machine with me, as we go to…

In high school, my uncle got me a pair of jeans from the fancy Levi’s store in SF. They were custom-made to measure, with exactly the fabric, cut, button fly, everything I ever wanted. They were Golden Pants. They were Dream Pants. I could never form a Sisterhood around them, because that would entail sharing my pants.

Obviously I wore them every day, because that’s what you do when you have Magic Pants, and so, as all jeans eventually will, they developed holes. At first, they were on the knees, and honestly, I was fine with that, because I guess in the early 2000’s maybe that was cool? Actually, it probably wasn’t, because “cool” has never been an adjective that has even bothered to share a sentence with me. The point is, I loved those pants, and didn’t care if my knees were getting extra ventilation.

“Effortlessly cool” and I have never even been in the same time zone.

I got a big rip right on my butt.

Now, since I had the aforementioned knee-holes, I knew that sewing a patch on them would be an exercise in futility. When you’ve loved a pair of jeans that long and that hard, the fabric itself begins to just melt away, so by the time you’re trying to fix it, the stitches just pull back out again; it’s a little like watching a dog try to catch bubbles, but they just keep popping every time. Only I’m not as cute as your average golden retriever. 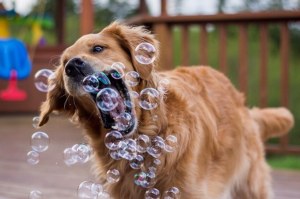 “THIS TIME I WILL CATCH ONE OF YOU FUCKERS!”

In one last desperate bid to keep my Pants of Happiness alive and kicking, I resorted to something I never thought I’d lower my sewing self to. That’s right, I thought I’d try gluing a patch on. Tim Gunn would be horrified.

The face feared across the fashion industry!

This was back in the days of college dorm rooms, so naturally I had a bizarre thrift store selection of clothes available to hack up to make a patch. Paisley, plaid, pinstripes, they were all within my reach. But there was one shirt, a shirt that was so ugly I couldn’t leave it in the store, a shirt that had the fuzziness of a teddy bear, with the spots of a leopard… clearly, it was meant to be.

And so, ten minutes later, my butt was furry.

First off, let me say it didn’t actually look all that appalling. I glued it from the inside, so the effect was kind of as if I had velveteen leopard print leggings on under my jeans, peeking out through the tear.

…okay, yeah, that didn’t really make it sound like a better idea, did it?

I should have just fully committed to the look.

But I was 19! Did I let that stop me? NEVER! I thought my new patch job was so hilarious, I resolved to continue to wear these pants every day, while everyone complimented me on my super-fabulous new look. Soon, everyone would be begging me to make them their own pair of leopard-butt pants!

And so, I walked confidently across campus, strutting my stuff magnificently. Sure, I immediately noticed that the much thinner fabric meant there was a cold spot on one of my buttcheeks (this was late fall in the Hudson Valley), but that’s what the circulatory system was for! Besides, I’d soon be inside, sitting in class, nice and warm.

I love you, Google Image Search.

Except halfway through class, I noticed something. I was absent-mindedly petting my own ass. I chuckled to myself, shifted so I was sitting squarely on my patch and wouldn’t be distracted, and continued taking notes.

It turns out that I really like petting soft things, and can’t fight an intrinsic need to touch fuzziness unless I’m really paying attention. And I don’t know about you, but I couldn’t really focus solely on not touching the furry bit of my backside.

Oh come on, don’t tell me you have an iron will when it comes to fuzzy things

Basically, I made the professor, and probably several students, deeply uncomfortable while I fondled my own butt for the rest of class. I had learning to do, dammit! I had better things to concentrate on than my newly-amazing-but-somewhat-distracting Amazing Pants!

Back in the dorm, the trend continued. It was like I had an irresistible urge to always have a hand on my asscheek. Which might sound sexy in theory, but in reality it was just kind of sad and dumb-looking. Also, everyone who saw my new genius fashion statement said some variation of, “Of course you attached a fuzzy leopard print patch to your butt.” After you hear that comment enough times in one day, you start to suspect it isn’t the compliment you originally made it out to be.

This is my suspicious face.

By the end of the day, my Roommate was rolling her eyes at my continued delight in having, in essence, and ugly stuffed animal bum, and the glue was already starting to come apart. Plus, when I finally took them off, I discovered that apparently cheap leopard print shirts aren’t made to be nearly as sturdy as denim, and a new hole was quickly on its way.

In the end, I had to abandon my magnificent experiment, and, eventually, my Pants of Wonder. It was a sad day, when a little bit of magic winked out of the universe.

But I’ll always have the memories of my day of glory. The day I had a fuzzy butt.