I’m one of those people.

You know the ones I’m talking about.

I volunteered at a nature center in high school, and wound up in charge of the lizard-bug-turtle-snake room, possibly because I was so obviously trustworthy and qualified, but probably because no one else wanted to do it. Either way, it meant that I got to wander around wearing my favorite snake like some sort of gently massaging body jewelry, all in the name of… uh… teaching children? Or something?

Come on, you can’t tell me cuddling snakes aren’t cute

The point is, I’m coming from a place where I think snakes have been maligned and misrepresented as heartless killing machines. They’re just doing what thousands of years of evolution bred them to do! Why can’t we all just get along?

Then, last night, I watched Planet Earth II, because David Attenborough is pretty much the best thing humanity has ever produced, and, well, this happened:

I HAVE NEVER BEEN SO STRESSED IN MY ENTIRE LIFE. WHAT THE SHIT JUST HAPPENED?

I feel several things need to be addressed here.

So now I have to reevaluate all my life choices; obviously things can never go back to where they once were. Never again will I be able to look at a snake without secretly wondering if it’s just waiting for the rest of its horde before they can launch a surprise attack.

Quick, hide the women and valuables!

What next? Where do I go from here? My heart will always be a newborn dragon-iguana, running like a maniac from a circle of hell come to life on earth. Go little guy, go!

I guess there’s only one thing for it.

We’re going to have to adopt every iguana off that batshit island, and keep them safe with us. I’m sure our apartment is big enough! 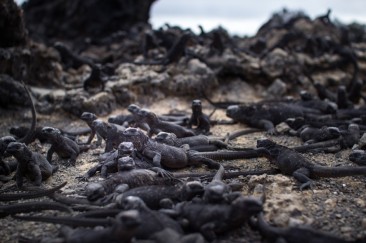 This, but in our living room.