I had a major mom-win this week: Ghost Repellent Spray.

It’s a spray, because I couldn’t get my hands on one of these.

Ever since the Kraken could talk, he’s been talking about the ghosts that live in his bedroom walls. He throws them into conversation matter-of-factly, the same way that he mentions there’s a dog down the street. When this happens we work really, really hard to keep a straight face and an even voice, even though I know I, at least, am FREAKING THE FUCK OUT INSIDE.

MY KID IS HAUNTED. 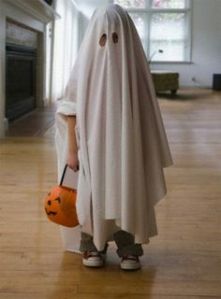 Is this my future?

Oh sure, we’ve gone through all the reasonable explanations. The light on his baby monitor (which we unabashedly still use, because creeping on your three year old while he sleeps is just as satisfying as creeping on your three month old) was our first thought. It’s infrared so we can check on him in the dark, and we thought the red light might be his “ghost.” But no, he clearly understands that’s the camera Mommy and Daddy use to spy on him.

Then, we thought it might be after he was staring at the light. You know how a camera flash will leave you seeing stars for a couple of seconds? Like that. (Wait, do people even use cameras any more? And do they use flash either? Am I a dinosaur, making outdated references, like rotary phones, or integrity in the media?) But even when we turn the camera off, so there’s no way he’s got residual lights on his cornea, the ghosts persist.

I only trust comedians. WHAT DOES THAT SAY ABOUT US?

We live in an apartment building with no insulation, so our next thought was our neighbor’s habit of rearranging his furniture at 3am was to blame, but it turns out you don’t really hear him in the Kraken’s room. Our bedroom, of course, is a different story that I won’t go into.

Basically, we’ve systematically tried to think of every single explanation for the ghosts, and every single time he’s looked at us the way you watch a three-legged dog hopping down the street. So cute, trying so hard, bravo for the effort!

All I want in life is to adopt a tripod dog. Our one-eyed cat can ride him into battle!

Over the years we’ve separately tried to convince each other that sure, he says he’s got ghosts in his walls, but who are we to say they’re not terrific, friendly ghosts who’ll teach him to read by four? Maybe he thinks the ghosts are his best friends!

Finally, I gave up trying to figure this out. Instead, I thought we could make a Ghost Repellent, to keep the ghosts away. Don’t be too impressed, I stole the idea from the internet, and just added some essential oils to make it smell like it was Obviously A Real Thing That Would Work. And to give him things to mix together, so he could see that this is a very specific, very effective magical recipe, handed from generation to generation.

We come from a long line of enchantment.

I wasn’t sure how it would go down – would it would just get him more agitated thinking, about how his entire bedroom is apparently filled with the undead? – but he was THRILLED. “Yes! Now? Can we do it right now? Let’s do it right now!” he hollered, launching himself through the air into the kitchen. He mixed all the ingredients carefully, then proceeded to spray his room until it smelled like the inside of a massage parlor, aroma therapy-ed until the inside of your nose started burning a little.

The he re-applied it later in the day.

And again that night.

And the next morning.

You get the idea. 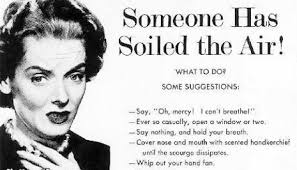 Unfortunately I left my hand fan in my other girdle.

Honestly, I don’t mind so much; the first morning when he woke up he had a big grin on his face and said the spray worked, and as long as the creepy little poltergeist child is happy I’ll put up with any amount of essential oils.

But seriously you guys. I’m pretty sure my kid is haunted.

In case you’re curious, here are the steps to making Ghost Repellent:

And finally, please remember that essential oils are potent, so clean it off your skin right away if any spills!

One thought on “Somebody Send an Exorcist”